“[The event is] a perfect example on how Holyoke can be smart and connected,” CRUSH member and Holyoke City Councilor Rebecca Lisi said. “It’s making use of the knowledge and energy resources that are in the five-college area.”

She said the economic summit is a first in a series of “Civic Learning Labs,” whereby residents come together and discuss what works in other communities, and how those lessons can be replicated in Holyoke. “It’s all about thinking big, about what is possible,” Lisi said. “We don’t have to put a lot of hard work into re-inventing the wheel. It’s really about figuring out how those other models can fit and work for Holyoke.” 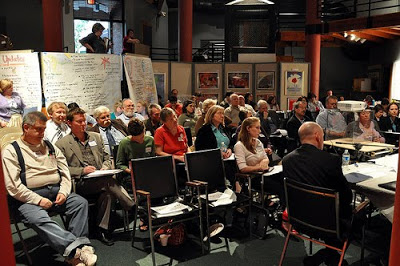 Casey Maliszewski, of the Roosevelt Institute, said the Mount Holyoke chapter was founded a year ago. The chapter, along with CRUSH, formed the summit to “stimulate dialog” on the city’s future development. “I think one of the purposes of event, and a great opportunity, is to learn what other cities are doing, because everybody has a different approach,” she said. “These gateway cities in Massachusetts, in a way, need to be aligned with one another, to bridge some ideas.”

John Dyjach, of the Holyoke Economic Development Department, was part of a panel that examined Holyoke’s current economy. He was joined by Brian Beauregard, of Holyoke Gas and Electric (HGE), and Bob Forrant, a professor at UMass-Lowell.

Dyjach said the “day-to-day, down-and-dirty” work conducted by city departments barely gets noticed. He said his department has set priorities, which includes retaining current businesses. “Our effort to retain businesses starts with outreach and we want to meet with as many businesses that we can in town,” he said.

He said the outreach can be frustrating at times because of limited resources, as city businesses face a number of challenges. Dyjach spoke of Holyoke’s industrial past, when internationally recognized companies were the norm. Now, he said, family owned businesses are the dominant
economic model.

Attracting new business since the downturn in the economy, he said, has been difficult, but that Holyoke possesses significant supply of water, which is used primarily for power generation, a key factor in the future development of the High-P e r f o r m a n c e Computer Center. Though there are sizable parcels available for the commercial and industrial use in the Ingleside section of Holyoke, the city’s main focus will be in developing the newly named Arts & Innovation District downtown. 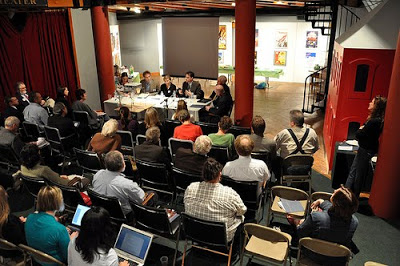 Dyjach said challenges exist with blighted and abandoned buildings. “The last thing we want to do is take down some of these buildings,” he said.

According to Dyjach, the Holyoke Mall at Ingleside is the city’s largest employer, as the mall employs more than 3,000 persons in the region. Holyoke’s unemployment rate, though, is over 12.2 percent, higher than the state average.

He said businesses, such as the Holyoke Health Center, have returned workers to city-center and brought back needed foot traffic. While the city has seen some growth, much is riding with the High-Performance Computer Center, which is scheduled to break ground in the fall.

Though the center will not generate many jobs, city planners feel high-tech and other companies will position their businesses nearby, which could generate high-paying jobs both in the city and region. In the next few years, a north-to-south passenger rail will return to the city, which could
spark more economic growth.

Holyoke’s future depends on theavailability of cheap energy, power generated by the dam and canal system and other green technologies. Beauregard said the HGE “keeps the lights on in the city of Holyoke.”

Since 1997, said Beauregard, HGE has not only focused on energy generation, but on telecommunications and has constructed a fiber optic network. The network connects 90 percent of medium and large size businesses to high-speed internet. Still, he said, energy generation will remain HGE’s major focus.

“We can’t forget our core business and we have to ensure that we meet our mission statement – Excellent rates, excellent customer service and reliable service,” he said.

Beauregard said the HGE is currently studying the viability of harnessing wind power from the top of Mt. Tom, hydrokinetic energy from the Connecticut River, and other sources, with the emphasis on low-emissions sources.

Mayor Elaine A. Pluta, spoke during a break. “People are here because they feel the momentum and energy in the city of Holyoke,” she said. “We are, indeed, on the brink of being revitalized and reenergized. There’s a renaissance coming to the city. Everybody feels that and wants to be part of it.” 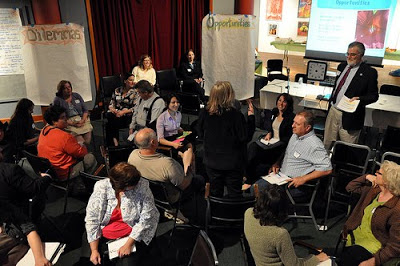 She said despite the national economic downturn, the city continues to move forward powered by an infusion of state, private and educational money, dollars that will go toward future high-tech and other projects.

The last half of the summit was devoted to “Lessons from other cities: Challenges and Opportunities.” The panelist included Benjamin Forman, of MassInc.; Kelly Aikin, of the Regional Planning Board of Hampden County; Adam Baacke, from the city of Lowell; Thomas Deller, of Providence Economic Development; and Timothy McGourthy, city of Worcester.

My vote for 2020 City Council President reflects the values and aspirations I have for our city.

Two years ago, I earned several votes for City Council president. This year, many people…

Holyoke, I'm so proud of all that we've accomplished since I was first elected in…