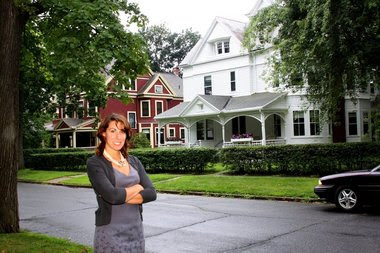 HOLYOKE – A street in the Highlands neighborhood has become the only one in the city with its own historical commission.

The street, which is perpendicular to Northampton Street, is lined with Victorians and old mansions that date to 1870, 1800 and 1891.

Mayor Elaine A. Pluta appointed the commission and the City Council confirmed the appointments last month.

“I think it’s wonderful. It’s been in process for” years, Olivia L. Mausel, a member of the new commission, said.

Mausel, who also is cochairwoman of the citywide Historical Commission, said Fairfield Avenue is the city’s only street with its own historical commission.

Establishment of the commission will provide protection from demolition and inappropriate remodeling as commissioners try to maintain the street’s historic nature, she said.

The commission is permitted to review only changes proposed to the exterior architecture visible from a public way. The commission’s existence doesn’t mean all changes are banned, Mausel said.

“The intent is to make changes and additions harmonious, and prevent the intrusion of incongruous elements that might detract from the aesthetic and historic values of the district,” Mausel said.

The commission will hold meetings, which will be posted and open to the public, to discuss changes residents want to make to Fairfield Avenue homes, she said.

Councilor at Large Rebecca Lisi has pushed for several years to get a Fairfield Avenue commission appointed and was glad it is now in place.

“It’s an excellent example of citizens really taking revitalization of a community in their own hands,” Lisi said.

Support on Fairfield Avenue for such a commission wasn’t unanimous. Some residents have been wary of the street having such a designation.

Others on the commission are Realtor Charles Davignon, 167 Main St., and architect Peter Papineau, 42 Fairfield Ave.

from The RepublicanWednesday, April 29, 2009 By KEN ROSS HOLYOKE - After two years of…

Letter to the Editor, Vote Lisi

from The Sun, September 28, 2007Dear Editor:Two years ago I answered a knock at the…

Recent Posts
Recent Comments
Archives
Help support Councilor Lisi's campaign by volunteering or contributing online.
Support the Campaign
Paid for by the Committee to Elect Rebecca Lisiwebsite by tuman.design
Back To Top
×