“Rebecca Lisi inspires hope, inclusiveness and a path to progress. I admire her resiliency and her ability to put together the pieces while adapting to changes,” said Hernandez.

“She is fearless and someone who can bring economic development results and continue to move the city of Holyoke forward,” added Lebron-Martinez. “She will not give up. She is persistent and resilient despite any challenge.” 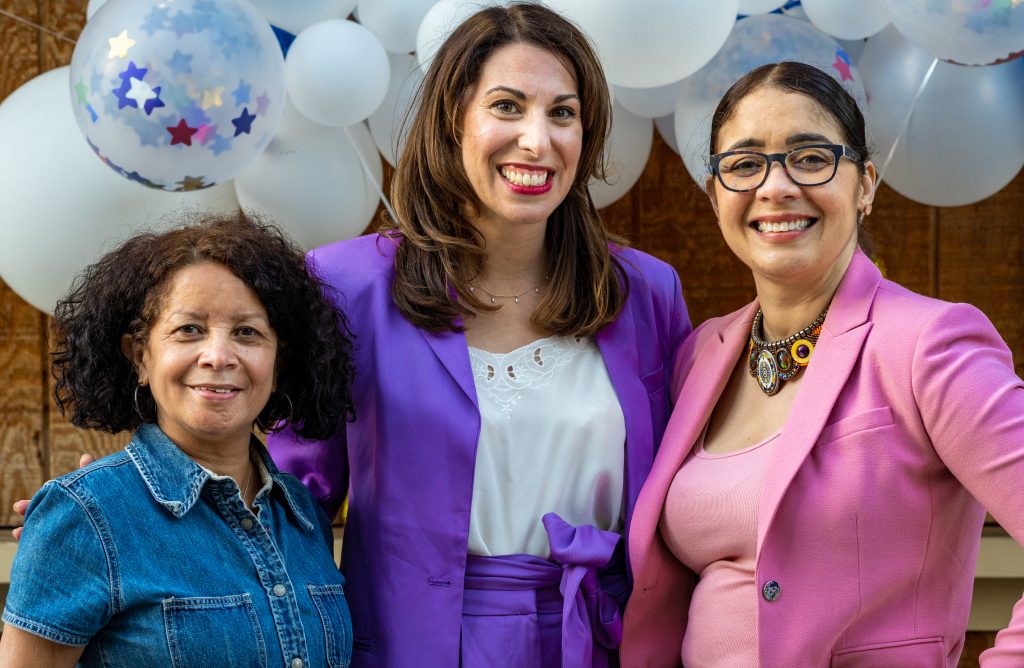 Holyoke’s population is over half Latinx, with 58% of residents reporting themselves to be Hispanic or Latino, according to the Massachusetts 2020 Census. There are three Latinx councilors, and four women on the council out of a total of 13 seats. Both Councilors Lebron-Martinez and Hernandez are not seeking re-election.

“Of all of the endorsements I’ve received during my campaign, the support of my Latina peers with whom I’ve worked shoulder to shoulder over the years means everything to me,” said Lisi. “Gladys and Libby have really become my political hermanas. We supported and learned from one another along the way. I appreciate the diverse backgrounds, skillsets and experiences they brought to their work in the city council.”

Lisi, 42, is a 14-year member of the Holyoke City Council and running for mayor. The endorsements from Holyoke’s Latina councilors speak to her ability to build bridges and work alongside strong leaders who represent the experiences of different groups across the city.

Lebron-Martinez, a ten-year veteran of the City Council, is no stranger to city politics and understands the challenges of making change in the city. She was first elected to represent Ward 1 in 2011, following an eight-year run as the School Committee member for her neighborhood.

Gladys Lebron-Martinez found her way into Holyoke politics through her advocacy work with the Valley Opportunity Council and Nueva Esperanza where she learned to build awareness and work with the Latinx community around issues of healthcare access and disparities, housing opportunities, education, workforce development, economic development and quality of life issues. Lebron-Martinez has been an especially fierce advocate for youth, focusing on advancing their education and leadership opportunities.

Over the years, Lebron-Martinez has maintained a reputation as someone who is organizing people on the ground and helping people right from their homes.

Libby Hernandez began her first term on the City Council in 2020 in the midst of the COVID-19 pandemic where meeting in person quickly came to a halt. Hernandez was forced to learn the intricacies of the parliamentary procedure of council meetings while the entire body was also learning how to conduct meetings on-line via Zoom.

Hernandez came into politics first through her position as a property manager for the Holyoke Housing Authority where she identified the need to get more people involved in local decision-making processes, especially Latinos.

Hernandez’s personal struggle to access whole, nutritious foods when she moved her young family to Massachusetts instilled in her a passion for food equity issues. Through her role at the Housing Authority, Hernandez helped establish community gardens for the residents she served. She continued that advocacy in council chambers with her support for a backyard hen ordinance and easier permit access for community gardens across the city.

Lisi’s colleagues on the City Council know her to be a thorough and thoughtful communicator. “She is someone who has leadership experience in the political arena, someone who researches every order to have clear facts to inform constituents,” said Lebron-Martinez.

In the face of the global coronavirus pandemic that disproportionately impacted women, people of color and marginalized communities across the country, Lisi’s leadership continued to focus on inclusion for all at home in Holyoke.

“I will always remember the emotional support that she extended to me and my constituents during the middle of the pandemic when violence was on the rise and took the life of a 15 year old during an indescribable senseless act. She helped me lift up my barrio by creating the space to honor this victim and his family,” said Hernandez. “Her sincerity was evident as I witnessed her genuine investment in a community full of diversity, people of all backgrounds and colors that came together as one.”

With less than a week to go until Holyoke’s Preliminary Election on Tuesday, September 21, Lebron-Martinez’s and Hernandez’s support cap-off a busy summer of racking up endorsements, from an array of progressive advocacy groups, for the Lisi campaign.

Lisi has declared four pillars in her campaign to be Holyoke’s next mayor: economic development, education, welcoming to new neighbors and civic engagement.

The top two vote-getters in the preliminary election Sept. 21 will compete to become Holyoke’s next mayor on Election Day Nov. 2.

For more information about Rebecca Lisi and her mayoral campaign, visit votelisi.com.