“We need bold leaders like Rebecca Lisi who not only embody their community’s core values, but who recognize that transforming the face of our government is critical,” Kelly said in a statement to Lisi Wednesday. 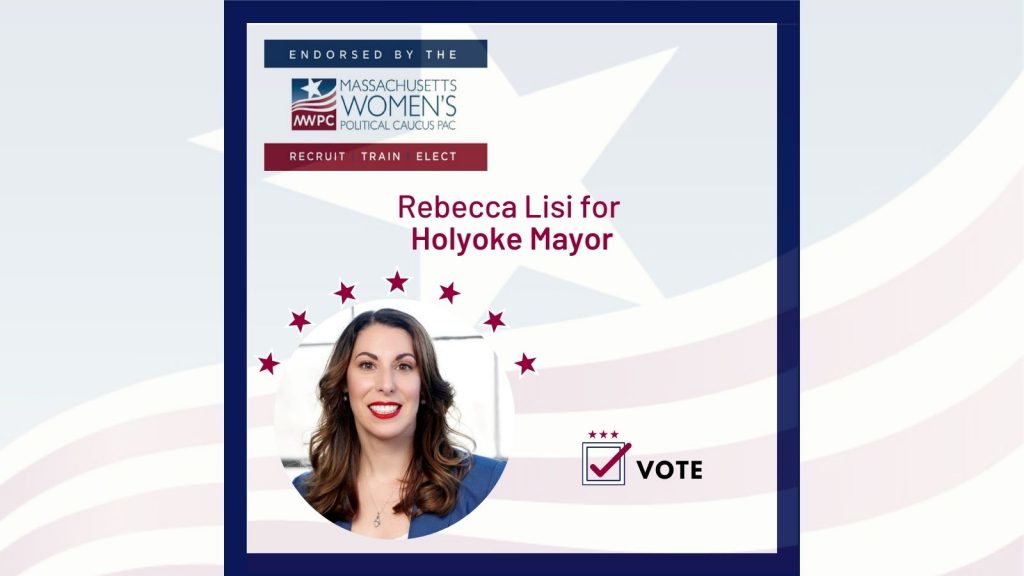 Lisi, 42, has been a Holyoke city councilor at large for 14 years and is chairwoman of the Ordinance Committee, the council’s busiest subcommittee.

“I am honored to have earned the endorsement of the Massachusetts Women’s Political Caucus PAC. Too often, and in too many arenas, women’s work goes unnoticed. This recognition is extremely validating of the hard work and leadership with which I have served Holyoke over the years,” said Lisi.

The Boston-based MWPC PAC is a non-partisan organization committed to increasing the number of women elected to public office and appointed to public policy positions, according to its website.

The MWPC PAC website said 86 percent of the candidates that the organization endorsed in 2020 won their general elections.

In Holyoke, where roughly half the population is Latino, Lisi is mounting a bilingual campaign. She makes remarks at events in English and Spanish.

“My campaign website is fully bi-lingual as are most of our campaign communications in order to reach all voters in Holyoke,” Lisi told MWPC PAC on its endorsement questionnaire.

Lisi told MWPC PAC she supports a woman’s decision to choose what to do with her body, as reflected in the 1973 landmark Supreme Court ruling Roe v. Wade. That’s a private decision between the woman and her healthcare provider, Lisi said.

Lisi spoke out against the closure of the birthing center at Holyoke Medical Center.

“Community birthing options and access to perinatal care are key issues that I would advocate for time and time again given the racial and economic disparities in this area,” Lisi said.

As Ordinance Committee chairwoman, Lisi has spearheaded development of the marijuana industry in Holyoke. The transformation has resulted in businesses thriving in formerly vacant mill buildings downtown producing jobs and tax revenue.

Marijuana businesses have added $5,726,900 in real property value since 2017 to Holyoke, provided $1,143,085 in tax revenue and produced hundreds of living-wage jobs with health benefits.

“I have a reputation for bringing big ideas to the problems that Holyoke is facing and pairing those ideas with practical action in order to make progress,” Lisi said.

Lisi has shined in recent forums held with other mayoral candidates. She spoke of the need for governmental policies that protect the environment such as Holyoke’s commitment to sustainable energy.

She has pushed to have the Holyoke Gas and Electric Department expand its fiber optic lines to ensure strong internet access to every household, a resource made more vital during the COVID-19 pandemic.

Lisi has addressed topics in the forums including the need to deal with housing displacement, poverty, racism, gentrification and the state receivership controlling Holyoke’s public schools.

Lisi has sought to help the community and police by calling for an independent assessment of the Holyoke Police Department. Currently under discussion in the City Council Public Safety Committee Lisi’s proposal is that, in an effort to obtain neutral, fact-based data and statistics, the city contract an independent assessment of Holyoke Police Department’s structure, policies and practices.

Lisi’s campaign for mayor is based on four pillars: economic development, education, welcoming newcomers and civic engagement. Lisi sees movement on these four issues as the key to positioning Holyoke as a economic and cultural hub for the region.

Voters will narrow the field of candidates for mayor to the top two vote-getters in the preliminary election Sept. 21. Those two will compete for mayor on Election Day Nov. 2.