Thank you to everyone who has taken time out of their busy schedules to be here with us, for this important issue this evening.

My name is Rebecca Lisi, Holyoke City Councilor at Large and I recently became a lead organizer with the Citizen’s Campaign, Yes to Invest – Holyoke to support the two new middle schools project, We are working alongside Invertir Holyoke and Neighbor to Neighbor Holyoke has recently joined the campaign as a coalition partner.

Since we live in a time where there is not a lot of media coverage, let me give a brief synopsis of the schools issue and bring everyone up to speed on why we are here and what we are asking for:

1) In 2016, there was a report published that demonstrated that our schools are in disrepair and that they need to be replaced

2) The city council funded a group of residents, educators, building officials, and architects to study the different ways we could renovate/replace the buildings and move to a K-5/middle school model that the city has wanted for some time

3) That committee made recommended that two new schools should be built- one on Chestnut St. across from Lawrence and one in place of Peck.

6) The city council has to vote on that ballot language and create the election, but has been acting like gatekeepers and dragging their feet on that vote

7) So, we are here today because the citizens want their voices to be heard!! We want to vote on the ballot and have a chance at new schools. We want the City Council to move the ballot question forward in the process. 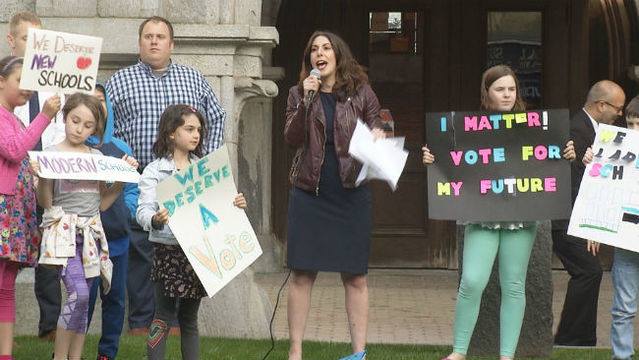 I join you all today as a mother who is fighting fiercely for a 5- year-old little boy. My son, Lucien, is enrolled in his first year in the Dual Language program at E N White Elementary School. He is in that program because, first and foremost, our family values PUBLIC SCHOOL EDUCATION. He is also there because our family sees bi-lingualism, bi-culturalism, and racial and ethnic diversity as tremendous assets that our child will benefit from while moving through the public school system in Holyoke. So, clearly I have a vested interest in the success of this project.

But, in some ways I am fighting for all of Holyoke’s children to have the same opportunities and benefits that Lucien will have along the way. In some ways, I feel as though Holyoke was the first baby that I ever fought fiercely for.

When I first moved here 15 years ago, I was excited to witness all of the possibilities embedded in this city and I have fought for so many positive projects in the time I’ve been on the council- the Canal Walk, the creation of an Arts and Innovation District along Race St., we turned Lyman Terrace into a Green Rebuild instead of leveling it to the ground. We’ve done a historic renovation of our library and built a New Senior Center. We paved the way for marijuana manufacturing to come into the downtown and we’ve witnessed the growth of downtown living with the Cubit building and other projects.

The investments from outsiders have been flowing into this city and it’s now time for Holyoke to put some real skin into the game and make a significant investment of its own. We can no longer wait for others to do the work of remaking and rebuilding OUR city.

**Holyoke is at a historic moment in which the voters will decide whether we move forward on this trajectory of growth, or if we will settle for fear and shrink away from this opportunity to outgrow old narratives about the city and really shine.**

When Holyoke invests in these two new schools, we demonstrate an ability to chart our own course and take control of our future. In doing so, we will attract even more investors, more businesses, and more families to the City who together will help us grow the community and stabilize the tax base. When more people are sharing the responsibility to grow, it lessens the burden on any one individual.

Now, I know that many people are concerned about the tax impact of this project and the city’s ability to shoulder the cost. Many people are under the impression that the city is operating in the red and I want to state, for the record, that that is simply not true. First, Cities and States are not allowed to operate in the red through so-called “deficit spending.” Second, while our budget is constrained- meaning that we can’t do as much as we’d like to in terms of city services, staff, and salaries- we can afford to take on the debt exclusion that operates like a mortgage alongside the city’s budget.

The price for two new schools will never be less- waiting escalates all construction costs and we lose the chance to take advantage of low interest rates on a construction bond today. Renovating means that we pay for a temporary fix and then pay again and pay more at some later time. For those who have given us ultimatums that it’s either “the mall or the schools” or “taxes or the schools,” we say NO WAY. It’s not about WHETHER we are going to build these two new schools– it’s about HOW we will build new schools. So, we invite you to the table to work with us on a plan to finance and fund our schools.

Holyoke is at a historic crossroads.

It’s an opportunity to build an entirely new, safe, and healthy environment for students to learn in.

It’s an opportunity to build a new set of expectations for our children to aspire to.

It’s an opportunity to build a bi-lingual, bi-cultural community around our public schools.

It’s an opportunity for Holyoke to invest in a moment that will help it finally realize its fullest potential.

Holyoke- we have everything we need to be successful, it’s just a matter of believing in that potential and taking action- small steps- that are in line with that belief.

The greatest risk we face is in doing nothing and letting this opportunity to grow and shine pass us by.

We hope you will join us and support our efforts through the citizens’ campaign for to new middle schools- Yes To Invest. You can donate online and sign up to volunteer with this amazing effort to make Holyoke’s potential a reality.

Hello, my name is Rebecca Lisi and I’ve spent the past 14 years as a…